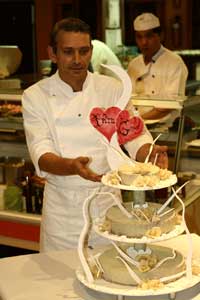 Philippe Laurent, a certified "Art Chef Pastry" from Annecy, France and Vanessa started their French pastry business on the Corralejo circumvention in March 2010. Since then the business grew steadily, despite the actually unfavourable economic conditions.

Philippe's story, in fact, starts in 1920, the year in which his grandfather Pierre Laurent began his Pastry Shop in Annecy. A couple of years after - in 1924 - he creates "Le Roseaux du Lac Annecy", a pastry based on coffee and chocolate. It soon becomes an international reference for the city of Annecy. Father Bernard continues the tradition with success, together with his brother Jacques.

Grandson Philippe starts his career at the age of 16 by entering the local Gastronomy & Pastry College. From the age of 18 to 24 he works at several reputed restaurants like the one in Hotel Nikko in Paris. During the following 9 years he learns and executes the skills of Art Chef Pastry at the family business in Annecy. Philippe became a culinary globetrotter, always eager to learn and create. He visits several working places like in Genève or in London, where he was Chef in the 1 Star Michelin restaurant "Gascon" and which brings him even to the Embassy of France in New Dehli, India where he is consultant/responsible for the setting up of luxury Tea Salons. At the end of his studies he collected several certificates: Chocolatier, Traiteur, Confiseur, Art Chef Pastry and restaurateur gastronomique. The love to Fuerteventura brought him here and he wanted its inhabitants to enjoy from his skills.

Philippe concentrates on the French pastry style, but he is absorbing the specifications and properties of local and Canarian produce in order to develop new combinations. Some ideas already have left the stadium of thoughts.

La Folie des Délices offers 100% own production, even some standard ingredients like the cake decoration, cream, etc are made in-house. Philippe also offers all catering services upon request. You can enjoy his products from breakfast over lunch through tea-time and feast. Succulent crispy French croissants, tartelettes, quiches, rolls, mille-feuilles, melting chocolate (moëlleux) are only some of the tempting and mouth-watering creations of Philippe. But Philippe also pays attention to those people who are diabetic: he offers sugar, milk or egg-free pastry.

No wonder why customers also come from the South of Fuerteventura and even from Lanzarote to enjoy his pastry creations.

"Haute Couture" Art Pastry and only at the price of a pint of industrial beer.