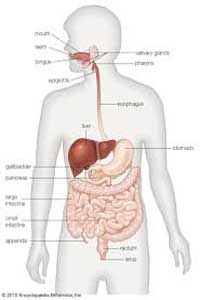 The exchange centre for food and poisons.

Our modern society is increasingly plagued by gastrointestinal complaints. They are caused by stress, lack of exercise, environmental influences and – of course – an unbalanced diet.

Our digestive system, also known as the gastrointestinal tract, includes all organs involved in food intake, transport and digestion. They absorb nutrients and water or excrete indigestible and not usable substances.

First, all solid food components are liquefied in the stomach. Proteins are digested and bacteria are killed. The next station of the food porridge is the adjacent duodenum, in which the fat is digested. The following small intestine absorbs the remaining nutrients and the large intestine finally absorbs the liquid including the electrolytes dissolved in it. During this entire process, around 10 litres of fluid enter the intestine through drinking, saliva, gastric juice, bile, pancreatic secretions and intestinal juices, which are then returned to the body's circulation. If this highly complex system is disturbed, we are threatened with diarrhoea and dehydration.

An unhealthy lifestyle often makes itself felt in the gastrointestinal tract, causing a nauseous feeling, heartburn, bloated, diarrhoea, constipation or flatulence. Many diseases of the digestive system are harmless. They cause discomfort for a few days, but can be cured with home remedies, bed rest and plenty of drinking. Water and unsweetened fennel or chamomile tea are at the top of the drink list. Light foods are recommended, such as vegetable broth, pasta, rice, white bread (toast and rusk), potatoes and porridge as well as stewed apples and bananas.

However, if there is no improvement after a few days or if symptoms such as frequent hiccups, a burning sensation during bowel movement, blood and mucus in the stool or other changes appear, this may indicate serious illness. If you have persistent gastrointestinal infections with fever, you should always consult a doctor. Their causes can be an intestinal infection or inflammation of the mucous membrane of the stomach (gastritis) as well as a stomach or duodenal ulcer. And these diseases must be treated professionally.

Book suggestion on this topic:
"GUT: The Inside Story of Our Body's Most Underrated Organ" by the doctor and non-fiction author Giulia Enders.