I took several attempts to find out how long the typical Canarian dog race Podenco Canario has been living on the island, but unfortunately I didn’t get a lot smarter.

The International Dog Federation (FCI) describes its origin as Ancient Egyptian. Most probably the Phoenicians, Greeks, Cartago’s and the Egyptians had brought them to the Canaries. The race would be about 7000 years old. As the rabbits (their prey) have been imported about only 500 years ago, after the Spanish Conquest, what was the purpose of bringing them here before? 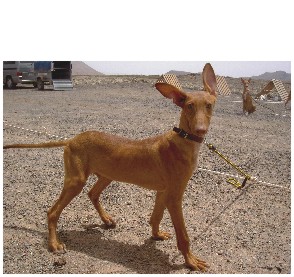 According to the actual Canarian dog register “Zoocan”, there are about 85.000 Podenco Canario dogs on the Canary Islands, a lot more than the “Bardino” or the “Presa Canario”.

But it also is reflected by the amount of dogs that are being presented to the “Killing Fields”, local municipal dog pounds where unwanted pets – inefficient hunting dogs, old dogs and even pets – are being dropped for their lethal injection.

It is therefore hard for us – animal protector – to accept hunting as being a noble sport. Although it is magnificent to see a well-trained Podenco acting during the hunting. To see how the dog is running around, freed from the chain and amidst its natural habitat. The ancient way of hunting with a master is impressive as it takes a lot of training and coordination between man and animal.

A responsible hunter normally doesn’t keep more than 3 Podencos as he knows well that good food has its price, that veterinary costs are high and that training chews up a lot of free time. A responsible hunter doesn’t breed one set after the other to select only the best and to drop the other ones in a box at the gate of the “Killing Field”, nor does he execute old and ill ones by a shot in the head or keeps them on a chain for months without taking them out for a regular walk.

Hopefully, one day, this Podenco drama comes to an end and a responsible hunter doesn’t have to justify himself anymore for the abuse of his peers – because there will be no more. No more Podencos in the “Killing Fields”. Yes, this would be the correct treatment and just behaviour for the magnificent ancient inhabitant of the Canary Islands whose reputation of a dignified, beautiful and resilient animal is widespread.OKAPI / Tierhilfe