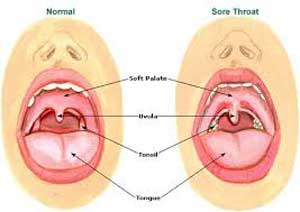 Bacterial and viral infections of the throat.

Actually, it is thought that they occur mainly in the cool season - but it is amazing how often people get sore throats, especially during the summer and during their holiday on Fuerteventura.

One reason for this can be the drastic temperature changes caused by the ubiquitous air conditioning systems.
For example: when we do some sightseeing on the many interesting spots on Fuerteventura and leave the car on a parking lot, then the car has become an oven in the sun and we often set the temperature in the car too low. Or when we come out of the midday heat into air-conditioned shops or restaurants, our bodies begin to cool down after a short time. Then the sore throat is pre-programmed.

It is better and healthier to set the air conditioning in the car or hotel room to a maximum of 6°C below the outside temperature. And when shopping in midsummer, you should always have a scarf or a thin jacket at hand.

But if sore throat is not caused by cooling but by infections with bacteria or viruses, the situation is more serious. The actual cause can be found out by taking a smear of the mouth/throat area and a blood test.

Angina tonsillaris (inflammation of the tonsils), is mostly caused by streptococci, which are transmitted by droplet infection in saliva or when sneezing. These bacteria can be detected in the oral mucosa and are easily treated with antibiotics. Angina, which is caused by the Epstein-Barr virus (whistling glandular fever), is quite different. Although the symptoms are the same for both diseases, the herpes virus can only be detected by detecting antibodies in the blood. This viral infection cannot be treated with antibiotics! The therapy, like most viral infections, consists mainly of sparing the body. However, symptoms such as sore throat, fever and coughing can be relieved with appropriate remedies and medication.