Modern architecture in the Canary Islands – by Carl (Charly) LANG. 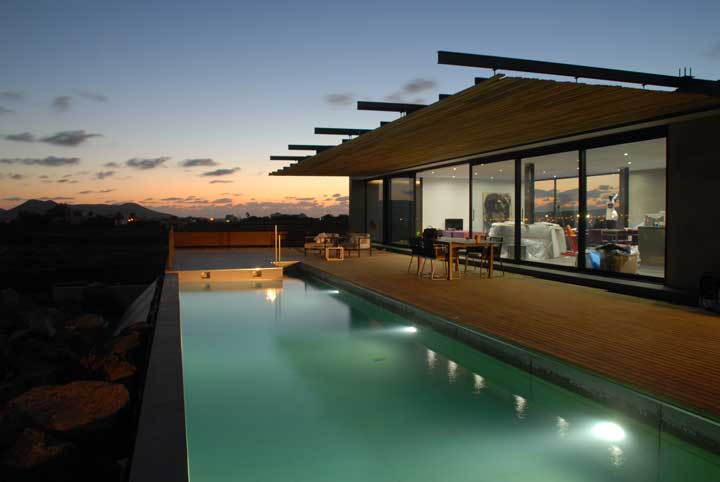 You can find it now almost on all islands. You just have to search. The TEA Art Center by Herzog & de Meuron, and Calatrava's Auditorio, both are in Tenerife's capital city, the MAGMA conference centre in the South of the island and the auditorium of Las Palmas. Milestones in the new Spanish architecture. Not to mention the Interpretation Centre de Timanfaya on Lanzarote. These buildings should be known by anyone who is interested in culture in the Canaries.

And here in Fuerteventura? None, until recently. Despite severe economic crisis, things are moving. For example, in the hip village of Lajares in the North of the island and a colourful village of the international surf community, you can now admire a new house that has no equal. It was built by the young Spaniard Ilya Escario, who studied in Barcelona and is since long realizing his dream on a small hill at the foot of two volcanoes. Two and a half years of construction and some comments about his project gave him sufficient courage to continue and to prove to the local traditional architecture, how stylish you can combine concrete, Corten steel - those rusted steel plates - black ceramics, lots of glass and wood. And finally can end up with some pretty colourful, lively and above all transparent result. Now that the construction is almost finished, you see more and more walkers and mountain bikers passing by, curious about the interior design of the exclusive villa. The Volcano House blends in well with the dark deserts and lava grounds here in the North of Fuerteventura. Perhaps this is indeed the impetus for more innovative projects on the Atlantic island.

What tolerance means on this island, one can see very well at the second example, in Parque Holandés. Here, the community has designed a respectable culture house before the economic crisis, which unfortunately is now empty. Many of the local residents had very difficult times with the looks of the new architecture. It is almost the only way to explain why some panes of glass on the back side of the building were demolished with stones, and the doors were sprayed with paint. Maybe the owner can leave these interventions of vandalism as silent witnesses, so everyone can see how tolerant and aggressive some people act against these progressive efforts. Or is it just absolute stupidity? Fuerteventura has to do some catching up on culture and it still will take years for a change in the way of thinking. Including in the tourism industry with its all-inclusive concept.

Questionable building regulations and approval processes sometimes discourage many young architects. Certainly there are some good initiatives scattered across the island, especially around Villaverde and Lajares, where some buildings were erected with bravery. Construction in Fuerteventura still means by far a mix of the traditional and the new, often copying the old, but rarely resulting in a successful and respectful preservation of old buildings, as it has been done successfully with the Casa de los Coroneles. Therefore you have to embrace the few good initiatives like the Casa Santa Maria and Don Antonio which are in the Valley of Betancuria.

The dilemma, of course, has its causes, starting since the Franco regime. The result of 40 years of architectural standstill is still to be found today. Censorship and very little information about foreign architecture at that time were on the daily agenda. Architecture books were used to build barricades, when the University of Madrid was the scene of the student fighting. Major parts of specialist literature was burned then.

More remarkable is the current success that many Spanish architects enjoy worldwide. Hopefully, all the building projects here on Fuerteventura, like the Auditorio of Puerto del Rosario or the colourful local Archives, will soon be completed. Likewise, the planned Congress building in Morro Jable and the Archaeological Museum of Pajara, both projects by Fernando Menis. To promote good architecture that the island desperately needs. Although some here would rather want a shoddy Disney World.